Contemporary melodic metal with a dash of old school attitude and electronic influences: ALL WILL KNOW from Darmstadt have been shaping the German metal underground for almost 10 years. Having their fingers on the pulse of the time in terms of music, with “contact.” (2012), “Deeper Into Time” (2015) and “Infinitas” (2017) the bustling sextet looks back on three successful album releases. And liveshows played in Spain, Poland, the Czech Republic, the Netherlands, Switzerland and recently even Cuba are proof enough that the ALL WILL KNOW-sound finds favour with fans beyond the German borders as well.
A good time to lean back and look at all that’s been achieved so far – which is exactly what ALL WILL KNOW and NOIZGATE Records will be doing now, dedicating the band’s oeuvre a retrospective compilation on vinyl: A total of 10 musical highlights from all periods of the band’s works is included on the record, simply titeled “ALL WILL KNOW”, which will be released on May 31st, 2019. Die-hard fans as well as new discoverers can look forward to a varied assembly of songs featuring treats from “Counting Stars” (contact.) to “Age Of Paranoia” (Infinitas). 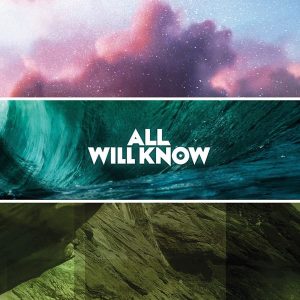 For prying eyes, here’s the tracklist:
Side A:
1. This Circle Never Ends
2. Deeper Into Time
3. Counting Stars
4. Dead World
5. How Far Would You Go? (Radio Edit)
Side B:
6. Home
7. Behind Your Mask
8. Feed Their Minds
9. A Dying Heart (Extended)
10. Age Of Paranoia
For anyone too impatient to wait for the record’s release date, here’s some more good news: „Home“, taken from ALL WILL KNOW’s 2015-album “Deeper Into Time” is to be released as a single in advance on May 3rd, 2019. A “retrospective single”, so to speak – and a clear choice: “’Home’ has a special meaning for us because the track is actually about us as a band feeling at home wherever people have a good time with us, party with us and listen to our music. We’ve just experienced all that again when we visited Cuba”, guitarist Jan Jansohn explains. “In that sense, releasing ‘Home’ as a single fits in very well with the idea of our Vinyl Compilation: As a band we are at home in our songs and we’re inviting everyone, to come in and get comfy there with us.”
Constantly transforming, always in search for new shores, but still down-to-earth and feeling at home in their own works – ALL WILL KNOW are restless and have arrived at the same time. What may the future hold? Suspense continues!