Right in time for Christmas, NOIZGATE Records has a special goodie to be put under the tree for you, announcing the release of a brand new WATCH OUT STAMPEDE VINYL EDITION for 12/07/2018 (Rel.)! The ten hand-picked tracks offer a delicate roundhouse-kick through the repertoire of the Bremen-based post-hardcore institution. In addition to the classic black pressing, the record will also be available as a special edition, coming on colored vinyl.

The time has come: WATCH OUT STAMPEDE are ennobling their greatest evergreens on shiny vinyl! After all, the five-piece from Bremen have been stirring up the scene with their massive sound somewhere in-between post-hardcore, emo- und metalcore since 2011 and are looking back on three successful full-length releases and appearances at Reload Festival or Wacken Open Air, to name but a few. Time for a survey that won’t only make die-heart fans’ hearts beat higher!

The VINYL EDITION, containing a selection of ten songs straight through seven years of WATCH OUT STAMPEDE band history, is described by the band’s singer and guitarist Dennis Landt as a “crazy ride through three albums”: Golden classics like “Emily”, earworms such as “We Are The Branches” and latest hits à la “Paper Hearts” offer a delicate roundhouse-kick through the band’s repertoire. Or as WATCH OUT STAMPEDE put it: “Everything, we’re thinking ‘Wow, we should have released it like this right away!’ is on that record!”

The menu, featuring banging breakdowns and heavy metal guitars, breathtaking blastbeats, pissed-off shouts and crystal-clear refrains comes in two delicate editions: Classy, on black vinyl and for real record lovers as limited Purple Vinyl Collector’s Edition, both including an inlay containing all lyrics. Needless to mention that the package also contains a download code for the compilation. 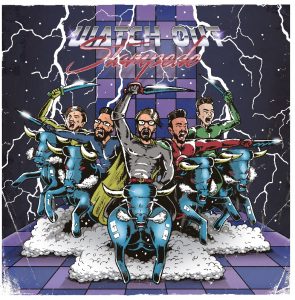